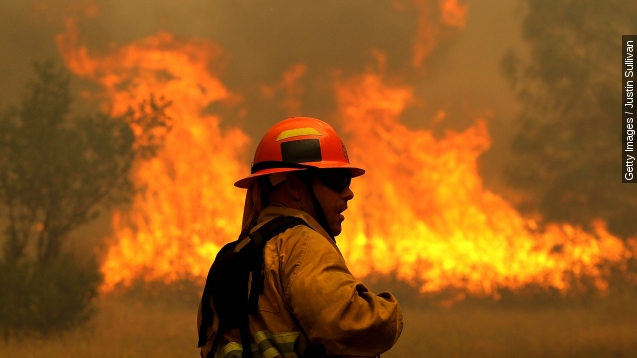 SMS
8,000 Firefighters Trying To Control California Flames
By Kate Grumke
By Kate Grumke
August 1, 2015
Fires are burning across the state, and weather conditions could make the situation worse.
SHOW TRANSCRIPT

California is in a state of emergency as wildfires continue to burn across the drought-stricken state.

At least 23 large fires were reported in California by the state's Department of Forestry and Fire Protection.

Eight thousand firefighters have been called in to battle the flames. On Friday, a U.S. Forest Service firefighter from the Black Hills in South Dakota was found dead after he went missing in the line of duty.

And hundreds of people have been evacuated from their homes. Despite the increase in fires this year, fire officials have told reporters the total number of acres burned has actually been lower due to swift responses from firefighters and forgiving weather.

Many of the fires are believed to have been sparked by lightning, and California officials warn even more dry thunderstorms are expected in the coming days. (Video via NBC)