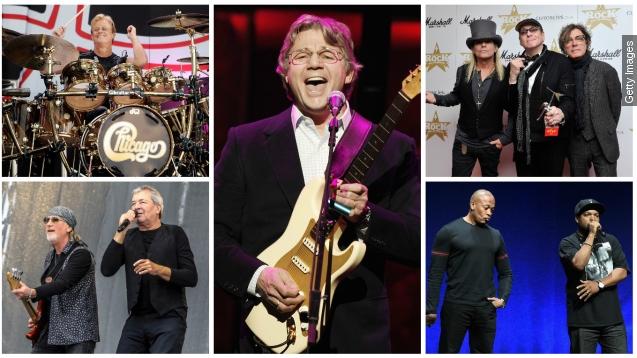 The Rock and Roll Hall of Fame inductee announcements are always mired in controversy. They made it? My favorite band got snubbed — again! The voting committee is too rigid. Computer bots!

Each year, it's always something. So while many music fans gripe over who didn't make it and launch social media campaigns for their favorite bands, we'll introduce you to the 2016 inductees, who were all previously eligible. (Video via Rock and Roll Hall of Fame)

First-time nominees Cheap Trick, Steve Miller and Chicago will be a part of the induction ceremony, along with Deep Purple and N.W.A. (Video via Mercury Records / Deep Purple, EMI Records / N.W.A.)

Per the rules, artists are eligible 25 years after the release of their first album. Of course, you don't just waltz in after those 25 years, but add an extra 10 to 15 years or more, and you see why some fans are saying, "'bout time!"

Chicago, the American rock band with jazzy influences; Deep Purple, the British hard-rock band with one of the most recognizable guitar licks ever; and Steve Miller, the blues-rock veteran, have all had at least 40 years between the release of their first albums and their induction.

Cheap Trick, a rock band that ripped through the '70s and '80s, had been eligible since 2002. (Video via Epic Records / Cheap Trick)

N.W.A., the OGs of gangsta rap, only became eligible in 2013 but have been on the ballot three times before. They'll be only the fifth hip-hop act inducted into the Rock Hall. (Video via Epic Records / N.W.A.)