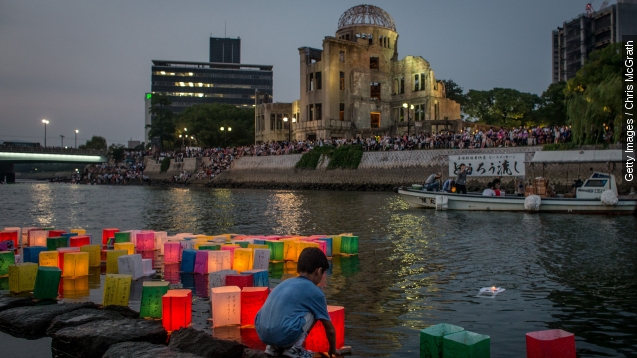 Seventy years ago, the United States dropped an atomic bomb on the Japanese city of Hiroshima, killing more than 140,000 people — most of them civilians.

At the time, and ever since, in the U.S. the bombing has largely been seen from a utilitarian point of view: The bomb was a tool to end a terrible war and save American lives. (Video via PBS, U.S. National Archives)

But at the same time crowds were celebrating victory over Japan in Times Square, the radioactive fallout from the bombs was still causing excruciating deaths in Hiroshima. (Video via History Channel)

Most of the thousands of people killed, including scores of women and children, burned to death.

And ever since, Japan has commemorated the bombing as a human tragedy, with ceremonies recognizing those killed. (Video via Fuji News Network)

"People of the world, especially leaders of nuclear armed nations, please come to Hiroshima to contemplate peace in this, a bombed city,"  said Kazumi Matsui, Hiroshima's mayor. Matsui called on world leaders to abolish nuclear weapons, a cause he spends much of his time pursuing.

But it's a daunting task. There are estimated to be more than 15,000 nuclear weapons out there, and few countries want to give them up.

That's despite the fact that most of today's weapons are many factors more powerful than the bomb dropped on Hiroshima. (Video via National Nuclear Security Administration)

While the U.S. says it's decreased its nuclear arsenal by 85 percent since the height of the Cold War, it has steadfastly opposed all resolutions to fully abolish nuclear weapons. 70 years after the deadliest nuclear bombing in history, one of the strongest opponents to nuclear disarmament is the country that carried it out. (Video via CCTV)

This video includes an image from the National Nuclear Security Administration.