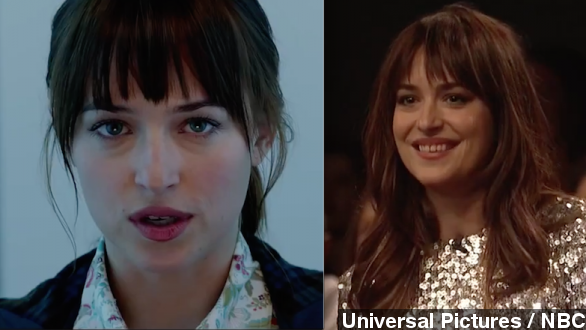 SMS
6 Ways 'Fifty Shades' And 'SNL 40' Were Exactly The Same
By Lauren Zima
By Lauren Zima
February 16, 2015
Believe it or not, "Fifty Shades of Grey" and the "SNL 40th Anniversary Special" had more in common than you'd think. Here are six eerie similarities.
SHOW TRANSCRIPT

Quite a Valentine's Day weekend for Hollywood: the big release of "Fifty Shades of Grey," the big "SNL 40th Anniversary Special." So, those sound very different, but they weren't. Here's why.

First, both tried to cram too much into a few hours. "Fifty Shades" the movie attempted to hit almost every scene from the book, which gave us results like Rita Ora being on screen for approximately five seconds. (Video via Universal Pictures UK / "Fifty Shades of Grey")

And "SNL" tried to get every person ever alive to ever crack a joke into its special. Meaning, I was exhausted by the end of the opening monologue.

Reason No. 2 is simple: Dakota Johnson appeared in both.

Jerry Seinfeld gave this advice to Johnson: "When you host, you're totally powerless. You're told what to do, what to wear. You just have to submit."

Reason No. 3: I laughed approximately once per hour for both events.

On "SNL," "Celebrity Jeopardy," "Weekend Update" and a few other bits got laughs. But considering this was the alleged culmination of 40 years of the best comedic talent ever — guys, I'm just sayin' we could've used more "Spartan Cheerleaders." More Jimmy Fallon. Less Kanye West.

Why was there so much Kanye West?

One thing that helped with these two experiences, though, is reason No. 4: alcohol.

OK, that might've just been my personal experience. Yikes.

But No. 5 — even though "Fifty Shades" and "SNL 40" were both kind of disappointing, both performed really well. "Fifty Shades" made record-breaking money; "SNL" got major ratings.

And No. 6: the endings. Believe it or not, they both ended the same way, with a "grey" standing alone.

"Fifty Shades" left Christian Grey all by his lonesome, sans Anastasia Steele, in what many called an "abrupt" finish.

And "SNL 40" left a grey-haired Lorne Michaels standing alone in what I would call an "awkward" finish.

There you have it: Six reasons why "Fifty Shades Of Grey" and "Saturday Night Live's 40th Anniversary Special" were the same experience. And you know what both could've used more of? Cheri Oteri.

As a bit from the famous "SNL" cheerleader skit goes (Video vid NBC):

"Safe sex is in your hands."

Just saying. She wasn't on "SNL," and she would've killed as like, Ana's mother or something.