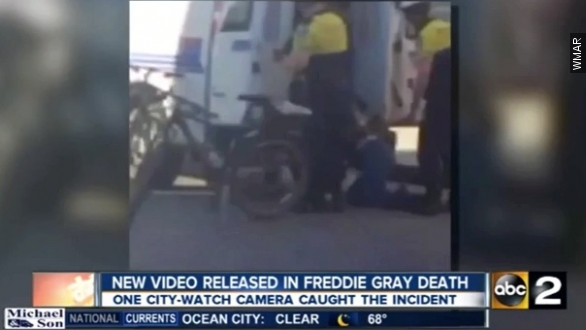 By Jay Strubberg
April 21, 2015
Six Baltimore police officers have been suspended amid the ongoing investigation into the death of 25-year-old Freddie Gray.
SHOW TRANSCRIPT

Six Baltimore police officers have been suspended amid the ongoing investigation into the death of Freddie Gray, the 25-year-old man who died after a police encounter left him with severe injuries to his spine.

Raw cell phone footage from the incident appears to show Gray being dragged into the back of a transport van while screaming, but officials say they have no footage showing the officers using excessive force. (Video via YouTube / YouHotNews)

"We had no evidence, physical or video or statement, of any use of force. ... He did suffer a very tragic injury to his spinal cord, which resulted in his death," Rodriguez said.

Gray's death sparked outrage in the community, with protesters marching around the city, including one demonstration at Baltimore City Hall on Monday.

According to court documents obtained by CNN, Gray was arrested for carrying a switchblade on his person, though the Gray family's attorney says it was only a "pocket knife of legal size" and claims police are only using that as a distraction. He also addressed Gray's death with the outlet.

"He was in good health when the police first contacted him, and he died of an 80 percent severed spinal cord and three broken vertebrae in his neck," William H. Murphy Jr. told CNN.

Officials say they've launched two criminal investigations into the incident — one regarding the officers' involvement and the other pertaining to Grey.

This video includes images from WMAR.