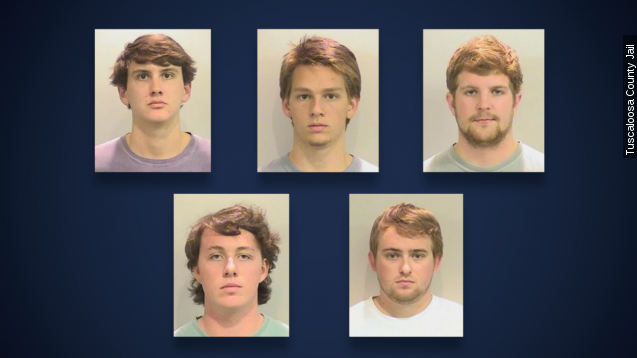 Five University of Alabama students were arrested Wednesday on charges of hazing.

The five students, who are all either 20 or 21 years old, are members of the Phi Gamma Delta fraternity.

While the university hasn't revealed details of the hazing in question, AL.com reported, "The fraternity members several weeks ago reportedly made pledges stand in buckets of ice and salt, a combination which led to burns on the pledges' feet."

The arrests were the result of an university investigation into the fraternity following a hazing allegation, according to the student-run university newspaper, The Crimson White.

"In light of this news, the Phi Gamma Delta chapter can't have any more social or new member events for the time being," a WIAT reporter said.

According to The Crimson White, all five students have been released on bond. The university has placed the students under interim sanctions.