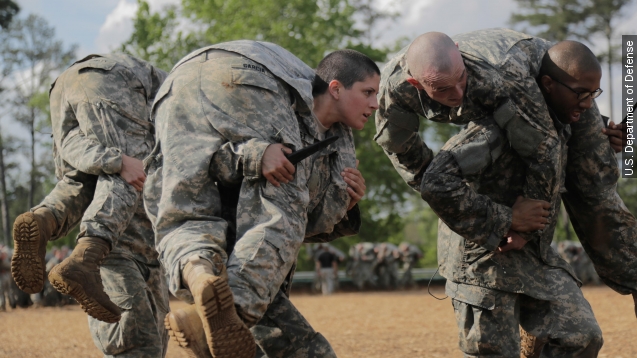 By Lexie Hammesfahr
August 24, 2015
To celebrate Women's Equality Day on Aug. 26, here are the five best moments from the past year when women took a stand on gender equality.
SHOW TRANSCRIPT

Equality for women has been an ongoing battle since the original women's rights conference in Seneca Falls, New York, in 1848. (Video via CrashCourse)

So, in honor of Women’s Equality Day, we're taking a look at some of the biggest moments for women in the past year.

No. 5: Actress Rose McGowan announced in June she was fired by her agent after her tweet made fun of a casting request to wear a revealing top to an audition.

In a Nylon interview, McGowan talked about Hollywood's problem with stereotyping women, "They're just stuck in this 'Mad Men'-slash-'Entourage' era where they're just boring."

No. 4: Two women became the first females to graduate from the Army's prestigious Ranger School. But even though they graduated, they're not allowed to join the Rangers or serve in infantry or special operations posts because of their gender. (Images via U.S. Department of Defense)

That didn't stop the women, who were two of 96 soldiers to complete the course. They said they wanted to succeed to open doors for other women. (Video via U.S. Department of Defense)

"I stopped and asked at the halfway point, 'Hey, can anyone take this weight?' Shay was the only one to volunteer to take that weight. ... I probably wouldn't be sitting here right now if it wasn't for Shay," one soldier explained.

"We have fought for everyone else's equal rights. It's our time to have wage equality once and for all, and equal rights for women in the United States of America," she said.

And solidly backing up that argument would be the 2015 Forbes' highest paid actresses list, which paints a stark contrast in salaries compared to the men's list.

No 2.: Emma Watson announced the launch of the #HeForShe campaign during her United Nations speech in 2014.

"If we stop defining each other by what we are not and start defining ourselves by who we are, we can all be freer. And this is what #HeForShe is about,” she said.

That speech went viral and inspired other women to start their own campaigns — most notably, Facebook COO Sheryl Sandberg.

No. 1: In March, Sandberg founded the Lean In Together campaign to help promote equality both at home and at work.

The term "Lean In" is used pretty often on social media now. It essentially means to support one another.

Tips on how men can "lean in" at home include placing equal value on chores traditionally done by boys versus those done by girls. Another tip: Don't tell your son to "man up" or call your daughter "bossy."

Help celebrate Women's Equality Day, and let's all "Lean In."