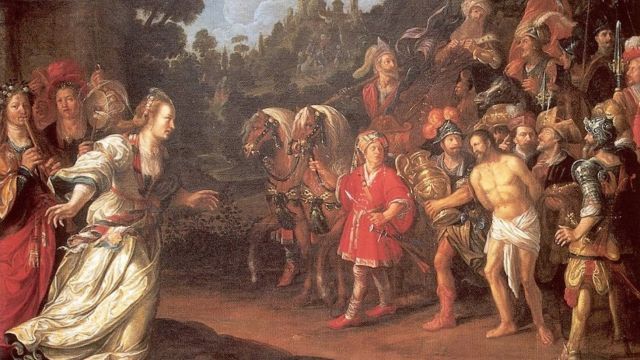 When five Golden Age paintings went missing from a Dutch museum more than a decade ago, authorities thought they would never be traced.

Fast-forward 10 years later. The artworks were recovered in Ukraine in 2015, pretty far away from their home at the Westfries Museum in the Netherlands. And now, they're back on display.

The paintings were taken from the museum, in the city of Hoorn, in January 2005. Officials believe thieves hid inside a coffin before disabling the museum's security system. In all, 24 paintings and 70 pieces of silverware were taken.

The stolen items were priced at about $1.45 million.

But in July of last year, a deputy commander from a Ukrainian nationalist group said he found the paintings and would hand them over.

When museum officials finally met with the deputy, the paintings were so damaged from years on the illegal art market that Dutch art historian Arthur Brand said the collection was only worth $560,000 — not millions as it was in 2005.

Illegal art trade is a billion-dollar industry around the world, and it's extremely rare for stolen pieces to return to their owners. Only about 5 percent of stolen artwork is ever returned.

So the Westfries Museum is a bit of an anomaly. The museum's director said: "We are very emotional about this theft. A part of our history was stolen, a part of our cultural heritage."