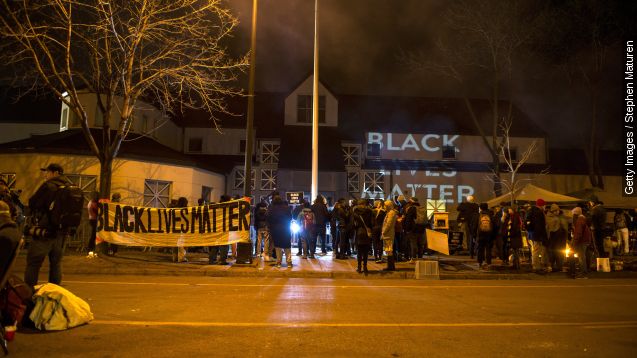 Police are looking for three white suspects after five people were shot in Minneapolis at a Black Lives Matter protest.

The shooting was a block away from the 4th precinct police station where protesters have gathered for more than a week awaiting answers after police shot and killed Jamar Clark.

The protesters say the shooters in this recent incident were "white supremacists" wearing bulletproof vests who wanted to disrupt the crowd.

"Everyone has been on high alert," said Minneapolis NAACP President Nekima Levy-Pounds.

Protesters have lingered outside of the precinct since Clark's shooting, demanding video of the incident, but it doesn't look like that will happen.

"Several videos related to this incident have been obtained, none of which capture the event in its entirety," said Minnesota's Bureau of Criminal Apprehension superintendent Drew Evans.

Officers say Clark was the suspect in a domestic abuse call and that he confronted first responders. Some witnesses say Clark was handcuffed when police shot him, though police say that's not true.

None of the protesters shot in this latest incident suffered life-threatening injuries.