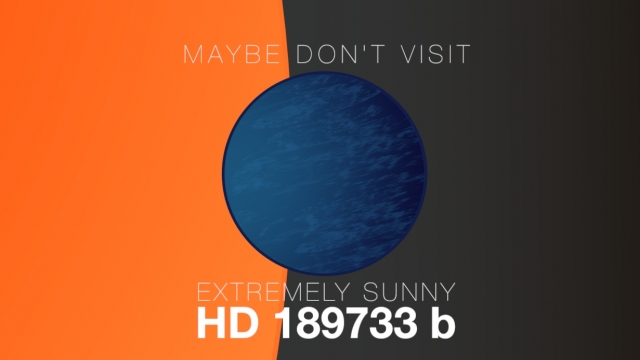 SMS
5 Planets Where The Weather Will Straight-Up Kill You
By Evan Thomas
By Evan Thomas
May 11, 2016
We haven't found any habitable exoplanets. We've found lots of highly uninhabitable ones, though.
SHOW TRANSCRIPT

We keep finding exoplanets. We can't reach any of them, but that's fine because there are quite a few you probably don't want to visit.

If you'd rather experience someplace cold, this planet with a mouthful of a name orbits a long way from a tiny dwarf star. Temperatures average 50K or -369F — more than six times colder than Antarctica.

HD 80606 b is a Jupiter-sized gas giant with an oblong orbit. It swings from farther away from its star than Venus is from the sun to more than 10 times closer than Mercury.

That means temperatures climb more than 1,000 degrees in six hours, and the massive dose of heat triggers storms that cover half the planet.

Kepler 36b doesn't have violent temperature swings, but it's got its own problems: a very close neighbor in Kepler 36c.

Every 97 days, the planets get so close to each other the tidal forces start to pull apart 36b's crust. A gas planet the size of Neptune crawling across the sky is probably a lot of fun to look at, but watch out for the lava.

Last but not least, HD 189733 b. This planet whips around its star in about three Earth days, so close that it doesn't even rotate. Oh, and it probably rains molten glass, driven sideways in 4,500mph winds. Maybe settle for a postcard in this case.

This video includes clips from NASA and the European Southern Observatory and images from David A. Aguilar. Music: "Nesting" by Birocratic (http://www.birocratic.bandcamp.com).