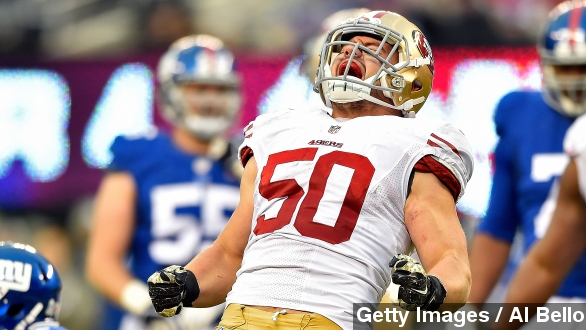 SMS
49ers' Chris Borland, 24, Retires Over Head Trauma Concerns
By Jay Strubberg
By Jay Strubberg
March 17, 2015
According to ESPN's 'Outside the Lines,' Borland is quitting the NFL because he's worried about his long-term mental health.
SHOW TRANSCRIPT

Chris Borland, an up-and-coming young linebacker for the San Francisco 49ers, says he has decided to retire from the NFL because he's worried about his long-term mental health.

According to a report by ESPN's Outside the Lines, Borland, who's just 24 years old, is quitting the league "because of concerns about the long-term effects of repetitive head trauma."

He's quoted in ESPN saying, "I just honestly want to do what's best for my health. From what I've researched and what I've experienced, I don't think it's worth the risk. ... For me, it's wanting to be proactive, I'm concerned that if you wait till you have symptoms, it's too late."

According to a CBS sports writer, Borland suffered two diagnosed concussions, with the last one coming while he played high school football.

Borland was a promising young talent who really broke out as a starter in the second half of last season; he recorded 107 tackles and one sack.

The 49ers released a statement saying they supported his decision, even though it caught them off-guard.

"[Chris] was a consummate professional from day one and a very well respected member of our team and community. ... We will always consider him a 49er and wish him all the best."

On a larger scale, Borland's retirement will likely stir more conversation about head trauma in the NFL, especially considering he decided to hang up his cleats at such a young age.

"He was a force for the 9ers last year. ... So the idea of a player of Borland's age at just 24 ... it's a large moment around the NFL for somebody deciding to quit the game because of this issue," ESPN Investigative Reporter Mark Fainaru-Wada said.