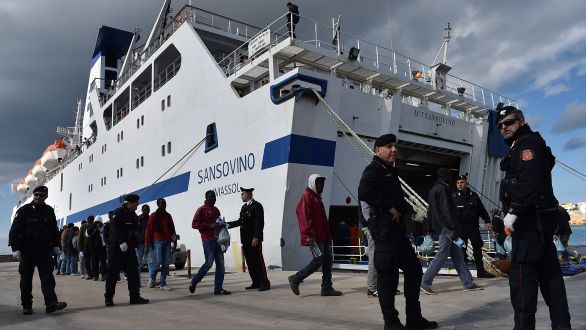 Last year, at least 3,419 migrants died trying to cross the Mediterranean, making it the deadliest maritime crossing in the world, according to the U.N. (Video via Italian Coast Guard, RAI)

"It's feared that 400 people died when one boat from Libya went down on Monday. Survivors on shore say many of the victims were children," a BBC anchor said.

In the wake of the latest migrant tragedy in the Mediterranean, the U.N. is calling on the European Union to do more. (Video via Al Jazeera)

The U.N., along with the pope, has criticized the E.U.'s efforts and reports 30 times as many immigrants have died so far this year as in the same stretch in 2014. (Video via France 24)

Triton is the E.U.'s joint operation with Italian authorities to manage migration across the Mediterranean.

It was launched after Italy scrapped its Mare Nostrum operation last fall. In little more than a year, Mare Nostrum rescued more than 150,000 migrants and arrested 330 alleged smugglers. (Video via Deutsche Welle)

But the E.U. favors a strategy of deterrence, and Triton only patrols within 30 nautical miles of the Italian coast, where Mare Nostrum covered more than 25,000 square miles with three times the budget. (Video via European Council)

Critics have pointed to the U.S. as proof deterrence doesn't stem the flow of migration and instead only increases the number of migrants who die. (Video via CCTV)

"They expected that they could use geography as an ally, that people would realize how risky it would be to cross and they wouldn't attempt. ... Hundreds of thousands of people went through, and thousands of them died," Robin Reineke, director of the Colibri Center for Human Rights, said in a TEDx talk.

Observers have cited the rise of ISIS as well as the increasingly chaotic situation in Libya as reasons for the increased Mediterranean migration.