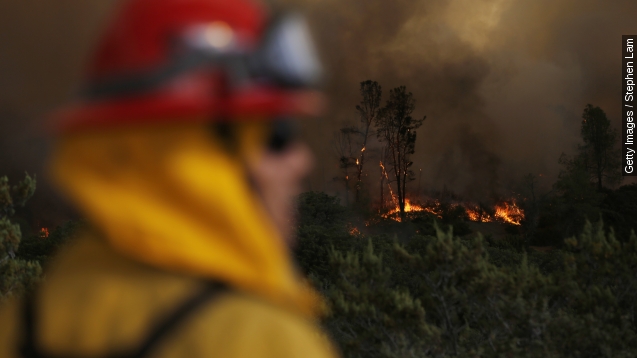 The Valley fire in California's Lake County is spreading at "astonishing" speed: In less than 24 hours, it's grown to more than 40,000 acres.

"Several buildings have already been destroyed and hundreds more are threatened tonight. Right now, four firefighters are in the hospital after getting hurt in what has turned into an absolutely massive blaze," said KGO-TV's Larry Beil. (Video via KGO-TV)

The fire has forced thousands of evacuations, including entire towns. California officials don't have an accurate count of the damaged structures yet. (Video via KBCW)

It's the latest fire in what has been a punishing season for California. The California Department of Forestry and Fire Protection's numbers show as of Sept. 5, fires have burned close to 150,000 acres this year.

And those numbers are likely to increase. The Butte fire has consumed 65,000 acres since it started Wednesday. (Video via ABC)

The Rough fire, east of Fresno, burned through 128,000 acres in six weeks. (Video via KFSN)

Meanwhile, hundreds of firefighters are on-scene or on their way to the Valley fire. Officials have yet to start tracking its containment.