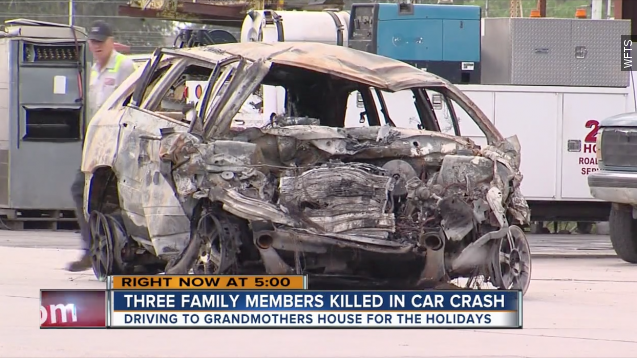 A fiery car crash on a rural Florida highway has left four people dead, including three relatives who were traveling to visit their grandmother.

Polk County Sheriff Grady Judd told reporters, "It is difficult to look someone in the eye and tell them they've lost their loved ones. It is really difficult to do that on the eve of Christmas."

Jim Bass, his brother Joshua Bass and their cousin Casey Baynard were driving a Chrysler SUV Wednesday to see their grandmother when they were struck head-on by a Toyota SUV that veered into oncoming traffic.

When emergency crews finally arrived at the remote location, the Chrysler was already fully engulfed in flames; the three occupants were found dead at the scene. The Toyota driver, Christian Bautista, was thrown from the vehicle and pronounced dead at a nearby hospital.