4 Charged In Connection To Paris Terror Attacks In France 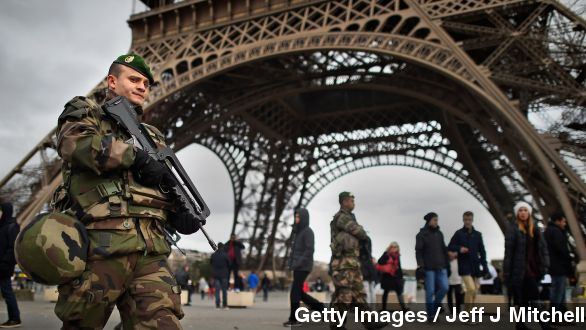 SMS
4 Charged In Connection To Paris Terror Attacks In France
By Jake Godin
By Jake Godin
January 20, 2015
Four suspects believed to have been involved in the French terror attacks have been charged and are expected to undergo a formal investigation.
SHOW TRANSCRIPT

Four men have been charged in France in connection to the Paris terror attacks earlier this month.

According to the BBC, the four men aged 22 to 28 are suspected to have links with Amedy Coulibaly.

Coulibaly was killed in a police standoff after taking several hostages in a Jewish supermarket. He killed four of the hostages and is believed to have killed a policewoman in south Paris the previous day.

The charges come after a wave of anti-terror raids took place throughout Europe last week. In total, they led to the arrest of 12 suspects France, 13 in Belgium and two in Germany.

French officials released three of the 12 suspects over the weekend while five more were released overnight on Tuesday.

According to France’s Europe 1 radio, police found fingerprints from one of the four arrested on one of Coulibaly’s weapons and prints from another in the car Coulibaly used. (Video via i>TELE)

Coulibaly claimed to have acted in cooperation with Said and Cherif Kouachi in the Charlie Hebdo attacks earlier this month. The Kouachi brothers died in another police raid.

The four suspects prosecutors charged were expected to appear before a judge later Tuesday.