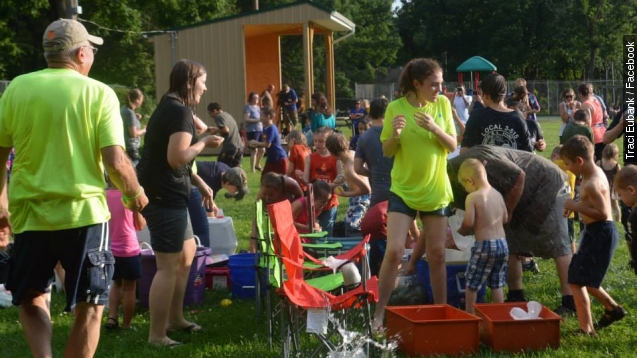 Typical birthday parties include cake and, hopefully, some presents, too.

But what about a giant water balloon fight? That's exactly what 10-year-old Camden Eubank from Roanoke, Virginia, wanted.

Apraxia is a disorder that causes people to have difficulty making accurate movements when speaking. Because of it, Camden said he felt isolated and had a hard time making friends — something his mom, Traci Eubank, wanted to change.

Eubank at first reached out to a nonprofit support group for apraxia — The Cherab Foundation. A woman with the foundation suggested she share the news on Facebook; then, that same woman shared it on Reddit, where it went viral.

The post received thousands of likes and comments. Nearly 300 people showed up for the massive water balloon fight.

The Troutville Volunteer Fire Department dumped water on the crowd, and strangers brought thousands of water balloons to celebrate.

Cakes covered picnic benches at the party, and presents for Camden have poured in from around the globe.

His parents later posted this video on Facebook. Camden's reaction says it all: "Best birthday ever. Thank you."

This video includes images from Facebook / Traci Eubank and music from Kevin MacLeod / CC BY 3.0.