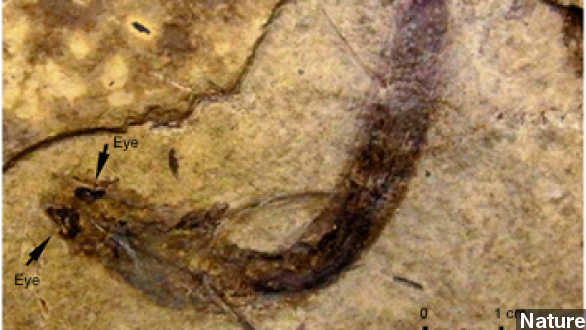 You know that magic moment when black-and-white television switched over to color?

Scientists have been trying to pinpoint when that same phenomenon began to develop in animals.

In a breakthrough discovery published in Nature, researchers are all eyes for a 300-million year old fish fossil with evidence of eye tissue.

During the study, scientists compared the rods and cones found in the fossil to a modern-day saltwater fish. Rods are in blue, cones are in yellow. The similarities are striking.

Pigments in the eye must absorb light for the rods and cones to make sense of it. Scientists also found evidence of one of these pigments, melanin. (Video via YouTube / Bausch + Lomb)

Scientists are excited because this is the first time rods and cones, collectively known as photoreceptors, have been found in any vertebrate fossil on earth.

Scientists have earlier identified Myllokonmingia, one of the first known creatures with a backbone, as having a rudimentary image-capturing eye. (Video via BBC)

But Myllokonmingia lived over 500 million years ago, so scientists have only hypothesized when the development of color vision arose in vertebrates, including humans.

Eye development is especially difficult to identify in fossil records, because soft tissues begin to decay rapidly after death. (Video via Burke Museum)

But the Hamilton Quarry in Kansas, where the fish was discovered, is unique. It was a shallow lagoon in the Upper Carboniferous time, and it contributed a tissue-preserving layer of bacteria to the fossil.

The fossil of the first known fish to see the world in living color is currently residing in Tokyo.

This video includes an image from flash.pro CC BY 2.0.