30 Miles To Freedom: Migrants' Deadly Journey Into The UK 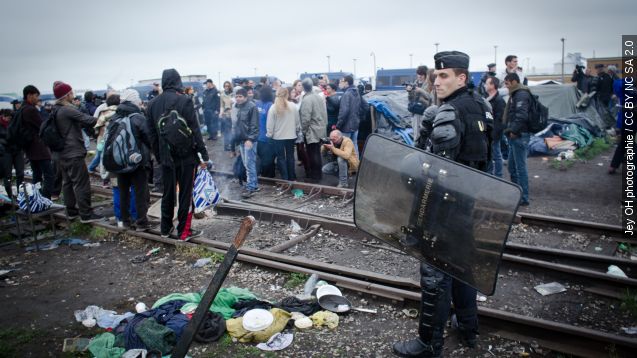 SMS
30 Miles To Freedom: Migrants' Deadly Journey Into The UK
By Jake Godin
By Jake Godin
July 30, 2015
Thousands fleeing Africa and the Middle East are trying to make their way into the U.K. via the Channel Tunnel from the French port city of Calais.
SHOW TRANSCRIPT

The U.K. has a migrant crisis. (Video via Sauvons Calais)

Thousands of migrants have gathered in the French port city of Calais. (Video via International Business Times)

They've fled Africa and the Middle East, and now, they're trying to enter the U.K. (Video via CCTV)

Hundreds gather in groups along roads or railways, hoping to catch a U.K.-bound truck or train traveling in the tunnel under the English Channel. (Video via BBC)

The BBC found there were many reasons a migrant would choose the U.K. over other EU countries. (Video via YouTube / Edouard Mathieu)

But they don't always make it. One man was killed recently, crushed by a truck.

Eurotunnel, the group that operates the Channel Tunnel, says it's caught more than 37,000 migrants attempting the crossing since the beginning of the year.

"And that we will remove more illegal migrants from our country so people know it's not a safe haven once they get there," Cameron said on BBC.

Asylum Aid, which provides legal representation for migrants, is critical of both countries' responses. (Video via Financial Times)

"Caught between two of the richest and most powerful countries in the world, and they can't seem to agree on a humane solution for them. It's absolutely disgraceful," Asylum Aid spokeswoman Zoe Gardner said on BBC.

And the problem goes beyond the U.K. The U.N.'s refugee agency says more than 100,000 migrants have crossed the Mediterranean into Europe this year. (Video via Italian Coast Guard)

This video includes an image from Jey OH photographie / CC BY NC ND 2.0 and music from Yinyues / CC BY 3.0.