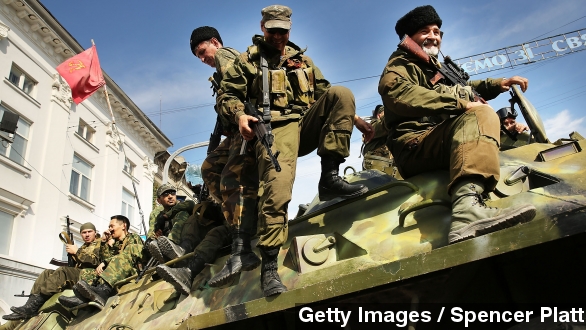 Ukraine's battle against separatist forces in the country's eastern regions showed signs of ramping up again after another round of bombings Saturday.

Ukrainian officials say 30 civilians were killed and approximately 100 were injured after rebels fired missiles on the city of Mariupol.

One CBS reporter said, "Mariupol is a strategic target. The biggest city between mainland Russia and the Crimean peninsula it took over last year."

Ukrainian President Petro Poroshenko condemned the attacks as a crime against humanity and announced he would cut short his trip to Saudi Arabia to plan a reaction to the attacks. (Video via The Guardian)

This attack comes just a day after the pro-Russian separatists announced a wide-ranging offensive against the government forces.

U.S. Secretary of State John Kerry called out Russia for a "irresponsible and dangerous decision" to resupply the rebels in recent weeks and warned of increased pressure if the country didn't withdraw support.

Ukraine's Prime Minister Arseniy Yatsenyuk has called for a special meeting of United Nation's Security Council to discuss Russia's role in the conflict, accusing the country of "violating the fundamental principles of international law and humanity."

Russian officials have routinely denied Western accusations of their involvement in the conflict.