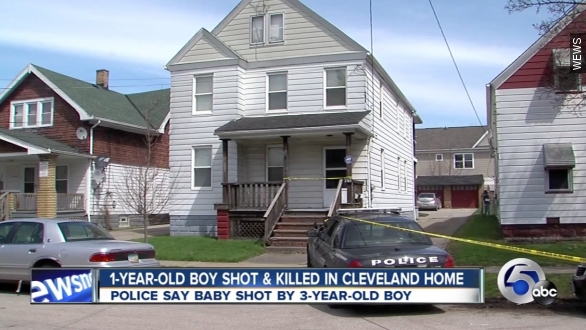 By Jay Strubberg
April 13, 2015
According to Cleveland police, a 1-year-old boy was shot and killed by a 3-year-old boy with a handgun that was left unattended inside a home.
SHOW TRANSCRIPT

"Makes you sick to your stomach. I mean, oh my god. The safety of guns ... people, they just don't get it," neighbor Tammy Dobrzanski said.

According to our partners at WEWS, Sunday, a 1-year-old boy was killed after Cleveland police say a 3-year-old boy fatally shot him in the face with a handgun that was reportedly left unattended inside a home. The victim was later identified as Braylon Robinson.

Cleveland Police Chief Calvin Williams says at least one adult and several children were inside the home at the time of the shooting. He says officials are investigating how the 3-year-old got possession of the firearm.

"A 3-year-old cannot be held accountable for a tragedy like this. You know, there have to be adults that either supplied the weapons, had charged the weapons or that knew the weapons were there and didn't do anything to safeguard them," Williams said.

According to Cleveland.com, neighbors say a woman and at least three children lived in the house. Those residents also stressed the need for more gun safety with WKYC.

"They don't know the difference between a toy and the real thing. Yeah, guns go 'boom' but how do I know this is a real one?"

"Just can't stress the importance of us being more consciously aware of gun safety especially around children."

Williams also said someone will be held accountable for the deadly incident — one he believes is an indication of a much broader problem with gun culture across the country.

... This fascination that we have with handguns, not just in the city, but in this country, has to stop," Williams said.