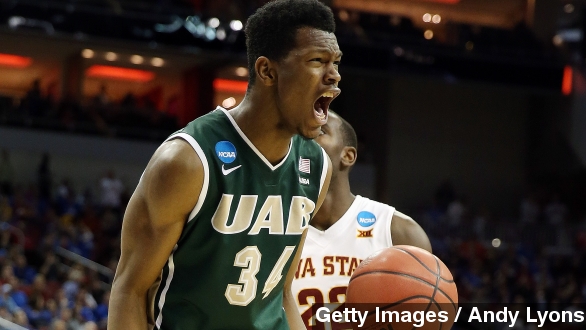 SMS
3 Ways March Madness Lived Up To Its Name On Day One
By Jay Strubberg
By Jay Strubberg
March 20, 2015
More than 99 percent of all CBS brackets were busted within the first few hours of the NCAA Tournament. Here's how.
SHOW TRANSCRIPT

Is your bracket busted? Well, don't worry because you're not alone.

Here are the three big upsets that are making most of us pull out our hair on day one of the NCAA tournament.

As you probably already know, Conference USA champs and No. 14 seed UAB kept the momentum going, knocking off No. 3 seed Iowa State.

Blazers fans have a lot to be fired up about too. As SB Nation was quick to point out, their big upset comes just months after the school shut down its football program, so the victory resonates with their fans on multiple levels.

And, even if the upset ripped apart your bracket, we'll give you a solid reason to jump on the team's bandwagon.

Notice those mismatched shoes they keep wearing? Well, that's all a part of an effort to raise awareness and money for pediatric cancer with an area cancer treatment center.

Next up: same seeds, different region.

"The first time that two No. 14 seeds have won in the same day since 1995, so you've got decades of history that we're breaking through," CBS Sports basketball writer Chip Patterson said.

Yep, it's about as wild as it gets. No. 14 seed Georgia State sent No. 3 seed Baylor packing early as well when R.J. Hunter nailed a buzzer beater pretty much from the parking lot.

R.J. is the son of head coach Ron Hunter, who might need to work on his celebrating technique. He tore his achilles tendon jumping around after their Sun Belt Championship win last week.

And then he flopped on the floor Thursday after his son's big shot.

No. 11 UCLA inches by No. 6 SMU on a ... goaltending call? UCLA's Bryce Alford launched a 3-pointer with just seconds to go, while SMU's Yanick Moreira appeared to jump up and tip it on its way down.

Now, according to NCAA rules, it's only goaltending if the shot has the possibility of going in. And it's also, yup, non-reviewable.

So, cue the controversy. Outsports said the officials were "clearly" in the right, Deadspin said they were all wrong, and CBS posed the obvious question: "should goaltending be reviewable?"

In the end, you probably fell prey to a few defeats. According to CBS, more than 99 percent of all its brackets were busted with the first few hours of the tournament. Wait a sec ... why did I tear up my bracket? Gimme some tape.