3 Prominent Storylines For The 2015 NFL Draft 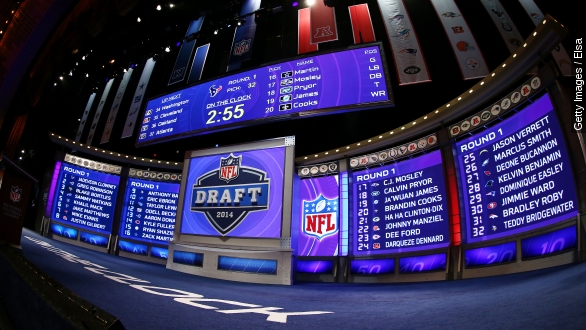 One of the most-anticipated events of the NFL off-season is just days away.

This Thursday, we'll find out if the Bucs go with Jameis Winston as the No 1. overall pick, if Marcus Mariota will find a new home in Tennessee — or maybe vice versa — and how the remaining field plays out in the 2015 NFL Draft.

And with it comes no shortage of predictions, analysis and possible trades for the big event. Here's a quick breakdown of some of the more prominent storylines to keep an eye on Thursday.

We'll start with Marcus Mariota, who's been the subject of much chatter. With elite quarterbacks somewhat scarce in this year's draft, a lot of teams could look to trade up and nab the Hawaii-born Heisman Trophy winner. (Video via Nike)

In one hypothetical, the Philadelphia Eagles, coached by Mr. Wheeler and Dealer Chip Kelly, would trade newly-acquired Sam Bradford to the Cleveland Browns in exchange for the 19th overall pick in the draft.

Then, in theory, the Eagles would bundle together the 19th and 20th picks, likely put them together with another player or two and trade up for Mariota. I know, it's kind of "out there," but it could happen, even though it seems like Kelly wants to hold onto Bradford. (Video via The Oregonian)

There's also the idea of the Browns doing some bundling of their own.

Browns GM Ray Farmer was recently asked if he'd seriously consider trading the team's two first round picks, No. 12 and No. 19. In kind of an anything-can-happen response, Farmer said, "Sure, why not?" (Video via Cleveland.com)

Though, some analysts think that probably wouldn't be enough to grab Mariota.

"The problem is that it's going to be very cost prohibitive to do, and it probably precludes them from going up that high even though they do have the two first round draft picks and would like to add another quarterback," NFL Insider Adam Schefter said.

Next up is the return of former NFL MVP Adrian Peterson. Peterson's relationship with the Minnesota Vikings has been a bit dodgy at times, and trade speculation just won't die down. (Video via Driven Apps)

Petersen has opened up in the past about his desire to play for the Dallas Cowboys, and his cozy relationship with owner Jerry Jones is no secret.

And with draft picks to play with, the idea of a potential trade has surfaced yet again, especially since RB DeMarco Murray jumped ship from Dallas to Philly this off-season, leaving a sizable hole in the Cowboys backfield.

Though, it seems like a long shot for this to happen, as the Vikings have stated very clearly they want Petersen to play for the purple and gold next season.

And, according to Yahoo, the Cowboys have had zero contact with the Vikings about a deal for the six-time Pro-Bowl running back, and that "anything stating the contrary is mythology." So this one might be dead in the water ... for now.

And, finally, will a running back be picked in the first round of the NFL draft? There's actually a pretty good chance.

Wisconsin's Melvin Gordon was the 2014 Big Ten Offensive Player of the Year, and Georgia's Todd Gurley is being touted by some as the most talented running back to enter the draft since Adrian Petersen came along in 2007.

One CBS mock draft even has Gurley cracking the top ten, though if he slips to No. 27, we're pretty sure Jerry Jones and the Cowboys would be eyeing him down with their current running back quandary.

But there's also been some concern over Gurley's health. He's bouncing back from a torn ACL which could put teams in a bind over whether to nab him. (Video via Instagram / tg4hunnid)

Again, at the end of the day, this is all speculation. But, hey, that's what makes the draft so much fun in the first place.