A Tiny Portion Of US Adults Own Half The Nation's Guns 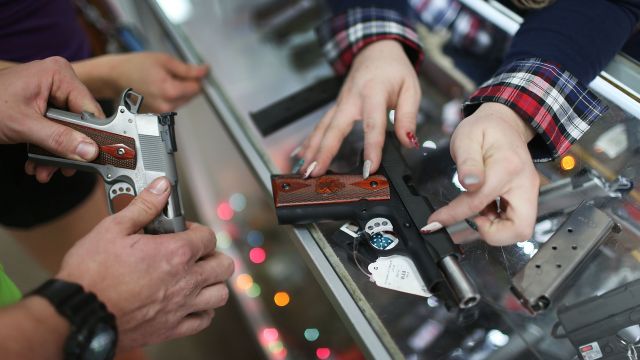 There are an estimated 265 million privately owned guns in America — and apparently, half of those guns are owned by just 3 percent of America's adult citizens.

The Guardian and The Trace obtained the unpublished results of a survey on gun ownership from Harvard and Northeastern universities.

The Census Bureau estimates there are about 247 million adults in the U.S. So according to the survey's results, 7.7 million Americans own an average of about 17 guns each.

Dr. Deborah Azrael, a Harvard School of Public Health firearms researcher and the lead author of the study, told The Guardian she was more interested in the Americans with just one or two guns than the Americans with lots of guns. "To change their behavior with respect to guns, and the ways in which they store them, or their decision-making — we could have a really big impact on suicide," Azrael said.

Estimating the number of civilian guns in America is hard because no one keeps track of the number of guns sold nationwide. So researchers have to rely on estimates from surveys and polls.

But even though the number of privately owned guns increased by 38 percent from 1994 to 2015, gun violence has gone down in recent years.

SEE MORE: Is The Gun Background Check System Flawed? We Take A Look

Experts are calling this new study important because of its scope and its questions. Almost 4,000 Americans responded to this survey, and this might be one of the first to not just ask if respondents own a gun, but how many guns they own.

The still-unpublished survey does not make any connections between gun ownership and public health concerns. It's going through the peer review process, and the final results won't be published until sometime next year.