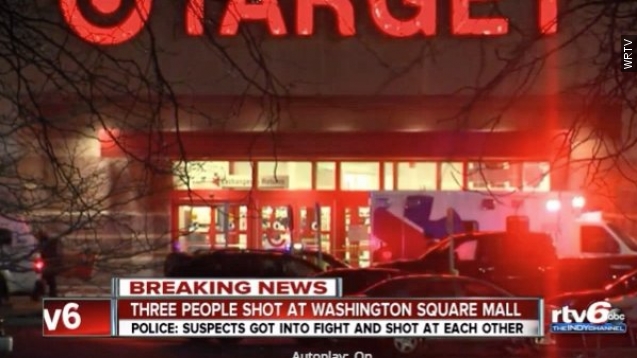 SMS
3 Injured After Gunman Opens Fire At Indianapolis Mall
By Ryan Biek
By Ryan Biek
October 29, 2015
Three people were shot at an Indianapolis mall Wednesday night after two men reportedly got into an altercation and one opened fire.
SHOW TRANSCRIPT

Three people were shot at an Indianapolis mall Wednesday night after two men reportedly got into an altercation and one opened fire. (Video via WRTV)

"It looks like we had a suspect who went into the mall, approached someone he knew — this was a targeted individual. They had words, then that individual shot him," a police officer told WTTV.

Witnesses described the suspect as wearing a ski mask and carrying a shotgun or AK-47, though police deny he had a long rifle in his possession. (Video via WRTV)

"My first thought was, in the storage room, looking for a place to hide," a witness told WRTV.

Customers say they heard at least 15 shots as they scrambled to hide in storage rooms. WTTV reports all three victims are now in stable condition. (Video via WRTV)

Police are still searching for the suspect and believe he knew one of the victims. A motive for the shooting is still unknown.