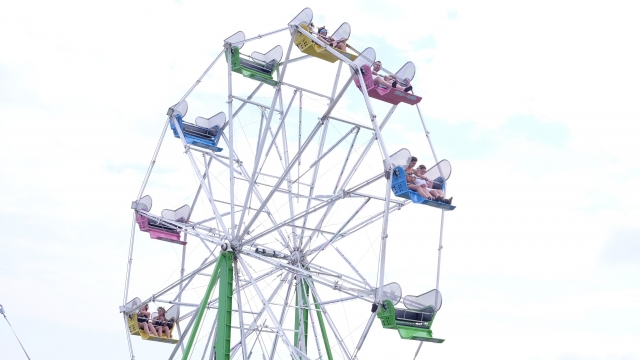 Three girls were seriously injured after they fell from a Ferris wheel at a county fair in Tennessee Monday night.

According to local police, one of the ride's baskets appeared to get caught as the wheel lifted it upward. Witnesses at the Greene County Fair say the girls suddenly spilled out of the ride and plummeted 35 to 45 feet to the ground.

"We're treating it like a crime scene at this point so we can determine whether there was any malfunction, make sure that there was no foul play, that it was just an accident," Greeneville Police Department Capt. Tim Davis told CBS.

Local station WATE reports two of the children were immediately taken to a local hospital by helicopter, and one was transported by ambulance.

One witness told WJHL: "It dumped them out totally like a glass of water on the ground. They bounced off the steel, and then they hit the ground once again."

One girl reportedly suffered a head injury and is in intensive care. Their names have not been released, but police say the three girls are from two different families.

The incident comes just two days after a 10-year-old boy was killed while riding the world's tallest water slide at the Schlitterbahn water park in Kansas City, Kansas. Police said the boy died from a neck injury.

As for this most recent incident, police say all rides at the Greene County Fair will remain closed until all investigations are complete. All other events for the fair will continue as planned.

This video includes clips from KSHB and WBIR.