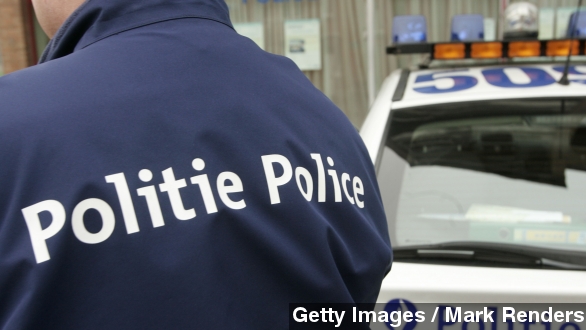 Police across Europe conducted raids on suspected terrorists from France to Belgium to Germany Thursday night. Officials say some of the suspects were connected to last week's terror attacks in Paris while others planned to stage their own attacks on police.

The most significant raids were likely the ones in Belgium where police say suspects had an imminent attack planned. In this video captured by an amateur photographer, you can hear the gunfight as police killed two men. (Video via YouTube / Frederic Hausman)

That raid in Verviers was just one of at least 10 in the country leading to 15 arrests. Prosecutors later briefed media saying the men killed in Verviers had automatic rifles, explosives, knives, fake IDs and police uniforms. (Video via i>TELE)

Sky News reported a federal magistrate in Belgium told reporters the alleged terror plan was "to kill police on the street or in their offices."

France 24 says police had the group from Verviers under surveillance for a week since they returned from Syria.

Belgian police and prosecutors say there is no link for now between their raids and the Charlie Hebdo attacks, but the violence last week in Paris had leaders across the European continent ready to step up anti-terror operations.

Officials say they investigated those people for connections to Amedy Coulibaly, the man who killed four hostages in a kosher supermarket in Paris last week before dying in a siege by police. (Video via CNN)

The French raids happened only hours before U.S. Secretary John Kerry visited the supermarket and the Charlie Hebdo magazine offices where two men killed a dozen people. (Video via BBC)

The raid in Germany appears to be the smallest of the three countries. Police said they arrested two men accused of plotting attacks in Syria, but stressed there was no evidence they planned to hurt anyone in Germany.