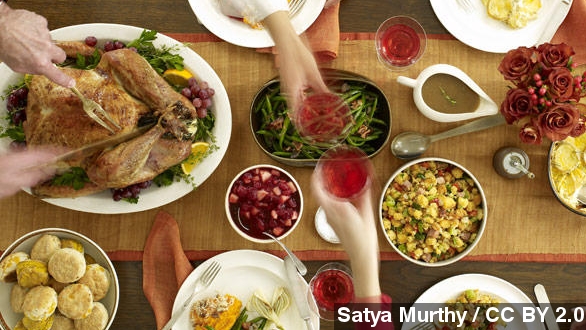 SMS
28-Year Low In Turkey Supply Isn't As Bad As It Sounds
By Jasmine Bailey
By Jasmine Bailey
November 15, 2014
Fewer turkeys will be available in the U.S. this year, meaning prices could be a few cents higher.
SHOW TRANSCRIPT

Family? Ah, nope. They'll still be part of the plan, for better or worse.

Football? That'll the on the tube just like every year.

It's actually the bird that causing a bit of a stir as the holiday gets closer.

Hey it's not nicknamed "turkey day" for nothin'.

We hear about turkey shortages almost every year.

And this year's no exception, according to the United States Department of Agriculture, we've hit the lowest point in turkey production since 1986. But if you look closer at the numbers, there's only a slight difference between this year and last.

The good news for all you out there who just have to have turkey on Thanksgiving: the stores should still be stocked. However, you might notice a slight price difference.

But in some stores you might not even see that increase. Experts say a lot of grocery stores will drop the price of turkeys in order to get customers to come in and do the rest of their Thanksgiving shopping.

So, why the low supply of gobblers? According to WFLD, the blame goes all the way back to 2012.

"It's costing farmers more to feed their turkeys. The drought two years ago lead to a spike in feed costs."

There's no reports on how long the drought's effects could last but as far as the other Thanksgiving dinner mainstays — your plate and your stomach should be full.