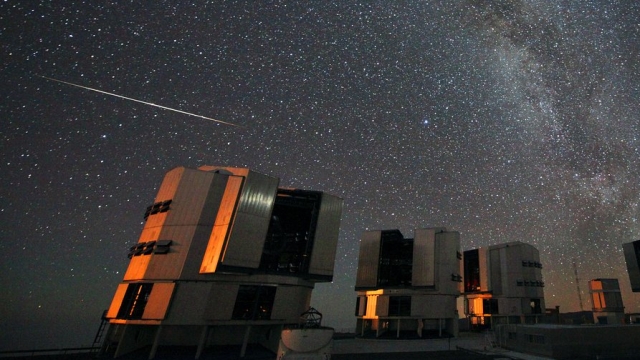 The Perseid meteor shower could be nearly twice as flashy this year.

Skywatchers could see as many as 200 meteors per hour under the darkest conditions. Astronomers call these increases in activity "outbursts."

The energetic show is thanks to Jupiter, in a roundabout way.

SEE MORE: Jupiter's Great Red Spot Is So Loud It Heats Up The Planet

All Perseid meteors come from the debris trail of comet Swift-Tuttle, which orbits the Sun every 133 years.

We see the Perseid meteor shower when Earth passes through the debris trail. Most years, it's not a direct hit.

But researchers at NASA say Jupiter has been pulling the dust trails around with its outsize gravity.

This year, Earth might run right through the middle of the streams, meaning more meteors will burn up in the atmosphere.

And the show's already started. Meteor activity is expected to peak on Aug. 11 and 12.

This video includes clips from Angel Fire Resort / CC BY 3.0, NASA and Tom Munnecke / CC BY 3.0 and images from Gerald Rhemann / NASA and the European Southern Observatory.