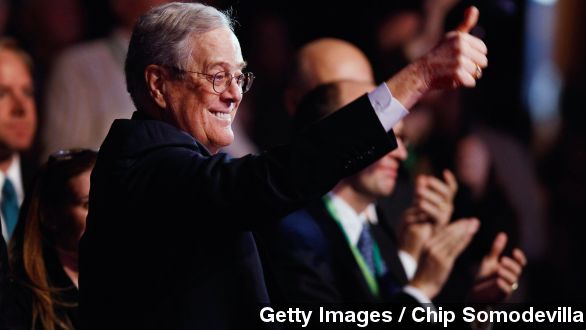 "If they were one person, they'd be the richest person in America," Rachel Maddow said on MSNBC.

Now the Kochs' political network is getting ready to raise an unprecedented sum of money for the next elections: $889 million.

That's the target for the Koch brothers' Freedom Partners fundraising group. That includes money for grassroots activism and advertising leading up to 2016.

To put that number in perspective, in the 2012 cycle, the Republican National Committee spent $404 million — Democrats, $319 million. And the Koch network then raised only $236 million. (Via Open Secrets)

A lot of that money went to Tea Party groups and to activists set on dismantling the Affordable Care Act.

That and fighting new environmental regulations will likely be the political network's main focus in the next elections. The Kochs themselves made much of their money in oil refineries.