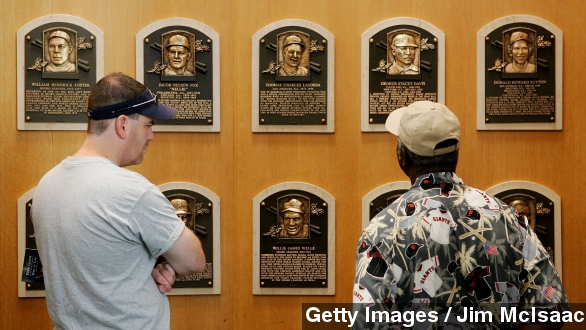 The votes are in, but the envelope is still sealed. Who will be next in baseball's most exclusive club, the Hall of Fame?

We're sure there won't be as much drama as there was last year, when one ESPN writer left his vote to Deadspin's readers.

"I probably won't have one next year because I gave mine this year to Deadspin," ESPN's Dan Le Batard said.

And likely not as controversial as two years ago when a flurry of steroid-linked players became eligible.

Here's what you need to know about 2015's less-controversial election.

First-ballot starting pitchers Randy Johnson and Pedro Martinez are practically locks to get in. Johnson is the holder of five Cy Young awards and 10 All-Star selections while Martinez sits not too far behind with three Cy Youngs and eight All-Stars.

Former Braves pitcher John Smoltz could also see induction in his first go. Smoltz would join former teammates Greg Maddux and Tom Glavine, who were inducted last year and made up one of the fiercest pitching staffs of the '90s.

As for those who aren't experiencing their first rodeo on the ballot, 2B Craig Biggio could finally squeak into the Hall after falling just two votes short last year of the 75 percent threshold.

And a Yahoo writer says catcher Mike Piazza "could end up as this year's Biggio" as early ballots made public continue to roll in. Piazza garnered 62.2 percent of the votes last year, his third year on the ballot.

What's noticeably missing from this year's list of potential first-ballot inductees is the number of steroid-linked names you could find on it.

Gary Sheffield is really the only player joining the ballot this year that has a strong link to steroids in his past.

Voters over the years haven't reacted kindly to those reported steroid users with arguably stronger resumes — including Roger Clemens, Mark McGwire, Rafael Palmeiro, and Sammy Sosa. That link will make it tough for Sheffield to garner support. (Video via C-SPAN)

The 2015 inductees to the National Baseball Hall of Fame will be announced Tuesday.

This video includes images from Getty Images and Kevin Steinhardt / CC BY SA 2.0.