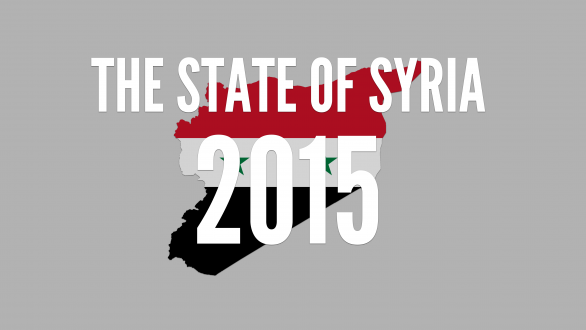 SMS
2014 Was Not A Good Year For Syria, Will 2015 Be Better?
By Jake Godin
By Jake Godin
January 1, 2015
The impacts of Syria's almost four year-long civil war have recked havoc on the country's economy, citizens and reputation. So will 2015 be better?
SHOW TRANSCRIPT

Seen there was Assad patting backs and dining with Syrian soldiers in a besieged district of the nation’s capital, Damascus.

In total, the U.K.-based Syrian Observatory for Human Rights estimates that more than 200,000 people have been killed with 76,000 of those deaths coming in 2014 alone. Almost half were civilians. (Video Sky News)

Syria will soon enter its fourth year of conflict initially sparked by 2011’s Arab Spring. The nation — from its economy, to its citizens, to its international standing — has been absolutely devastated. (Video via YouTube / دروع الثورة)

Syria’s economy has nose dived with unemployment exceeding 50 percent and half of the population now living below the poverty line. (Video via YouTube / Pedro Lopez)

And any semblance of a central government in Syria has gone out the window with four primary groups staking claims within the country’s borders.

The Syrian government, ISIS, rebels and the Kurds. Assad’s regime forces and ISIS hold the largest swaths of land with Kurdish territory being limited to Syria’s northern border with Turkey and rebels maintaining a patchwork of territory in the west.

As for Assad, the Syrian president has repeatedly been condemned by the international community since nearly the start of the conflict for refusing to give up power and later for using chemical weapons against his own people.

So, saying Syria is in a rough state would be an understatement. But what does 2015 look like for the ailing nation? Not good. At least according to Joshua Landis, director of the Center for Middle East Studies.

In a year-end prediction for Syria, Landis says the “Somalia-ization of [Syria] is inevitable so long as the international community degrades all centers of power in Syria and the opposition fails to unite.” (Video via Abkhazian Network News Agency)

He also calls 2014 “the year of ISIS”, referencing the terrorist organization’s rapid rise to power within Syria. And he predicts 2015 will “see ISIS seriously degraded, if not destroyed.” (Video via ISIS)

But there’s also a chance for peace, or at least some measure of it. In December, the Syrian government reportedly declared it was ready for another try at peace talks with rebels. The last round of talks in Geneva in early 2014 were a failure.