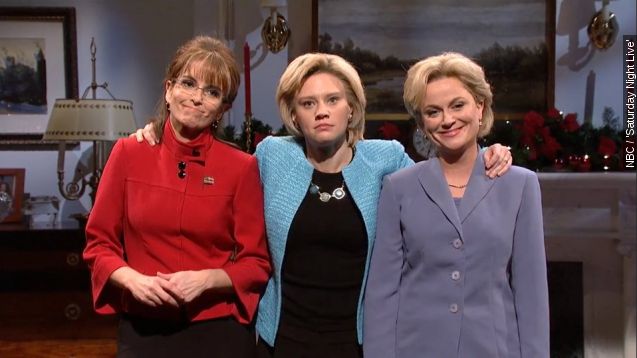 It was a blast from the past on "Saturday Night Live," and not just because Amy Poehler and Tina Fey were back to host ... but because they brought back 2008 Hillary Clinton and Sarah Palin, too.

When Fey brought back Palin on Saturday, it reminded us how iconic her impersonation is. (Videos via NBC / "The Tonight Show Starring Jimmy Fallon" and One America News)

Not only did she win an Emmy in 2008 for playing John McCain's running mate, but Fey's ditzy parodies of Palin went mainstream and entered the election circuit. (Video via C-SPAN)

"I was just trying to keep Tina Fey in business, just giving her more information. Job security for 'SNL' characters," Palin said during a 2008 rally.

Fey's impressions were less than favorable for Palin, and they seemed to legitimately impact voters. The more SNL's ratings jumped, the more people reported viewing Palin in a negative light — a relationship one study called "The Fey Effect." (Video via ABC)

But we can't have a healthy helping of Poehler and Fey, Fey and Poehler on every "SNL" episode now. The two are busy promoting their new movie "Sisters," which came out the same day as "Star Wars."

"SNL" will take a break until Jan. 16 when Adam Driver, who plays Kylo Ren in "Star Wars: The Force Awakens," will host.