These Rare 1-Cent Coins Just Sold For A Pretty Penny 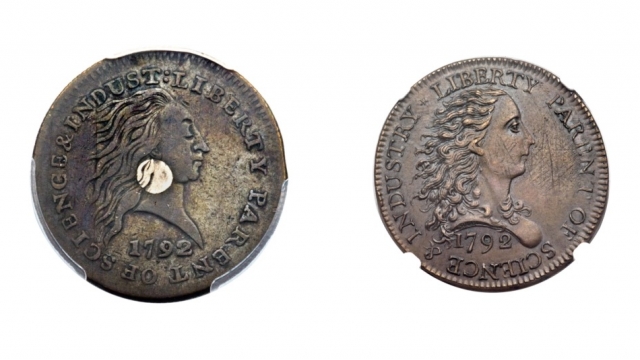 But a senior numismatist told the Orange County Register, "The combination of these coins' rarity, condition and historical significance is why they are worth so much."

The coins definitely have a rich history.

A Heritage Auctions spokesperson told the Los Angeles Times the silver center cent is among the first coins to be produced at the first U.S. Mint.

According to the auction house, this particular coin went missing before it was recovered at an English pub in the 1960s. The man who found it hung onto it until 1997, when he auctioned it off.

And the Birch cent has been purchased seven times before this latest auction.

The phrase "Liberty parent of science & industry" is engraved on both coins.

These two big sales are part of a five-day auction of currency from around the world. The event, which is also part of the World's Fair of Money, is expected to bring in around $30 million.

This video includes clips and images from Heritage Auctions and clips from the American Numismatic Association. Music provided courtesy of APM Music.