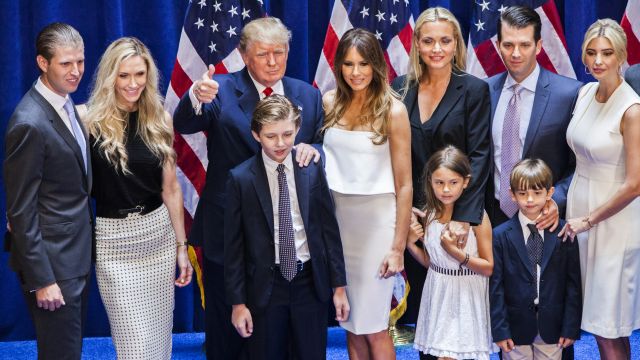 SMS
2 Of Donald Trump's Kids Failed To Register For New York's Primary
By Newsy Staff
By Newsy Staff
April 11, 2016
Ivanka and Eric Trump both missed the deadline to register for New York's April 19 primary. Neither is registered as a Republican in the state.
SHOW TRANSCRIPT

Oops. Looks like a couple members of Donald Trump's own family won't be able to vote for him during New York's upcoming primary.

"Ivanka, she made seven stops today at the polling areas," Trump said during a victory speech in New Hampshire in February.

Ivanka and Eric Trump both failed to register for New York's April 19 primary and won't be able to cast their votes for their father or any other candidate.

"No. They had a longtime register and they were unaware of the rules, and they didn't register in time. So they feel very, very guilty. But it's fine. I understand that," Trump said on Fox News.

New York is a closed primary, meaning you must be registered as either a Republican or Democrat to vote in it. Neither Eric nor Ivanka are registered for their dad's political party and would've had to register by Oct. 9 to vote.

Tiffany is a 22-year-old student at the University of Pennsylvania and has not been deeply involved in her father's campaign. Barron is 10 years old.

Luckily for Trump, the front-runner for the GOP presidential candidate nomination, the two missing votes likely won't impact the New York primary too much.

Trump is projected to win his home state by a wide margin over challengers Ted Cruz and John Kasich.

This video includes clips from Donald J. Trump For President, Inc., CBS and CNN, and images from Getty Images.