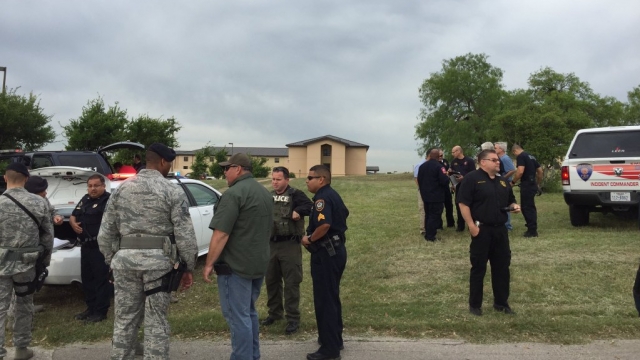 SMS
2 Dead In Apparent Murder-Suicide At Air Force Base In San Antonio
By Briana Koeneman
By Briana Koeneman
April 8, 2016
Authorities say they suspect the attack was a murder-suicide. The investigation is ongoing.
SHOW TRANSCRIPT

Two people are reported dead after a shooting at Lackland Air Force Base in San Antonio.

Law enforcement officials responded to the base around 8:45 a.m. local time. The Bexar County Sheriff's office said the scene was considered active as of 9:40 a.m., but officials believed the shooting threat was over.

A spokesperson for the sheriff's office told MSNBC the attack appears to be a murder-suicide. The bodies were found inside a building as officers cleared the base.

A witness at the base during the shooting told NBC: "You saw different airmen running in uniform and people spreading out. We were still in the car debating if we could leave."

Several nearby schools were on lockdown shortly after police arrived on the scene. The investigation into the incident is ongoing.

This video includes an image from the Bexar County Sheriff.