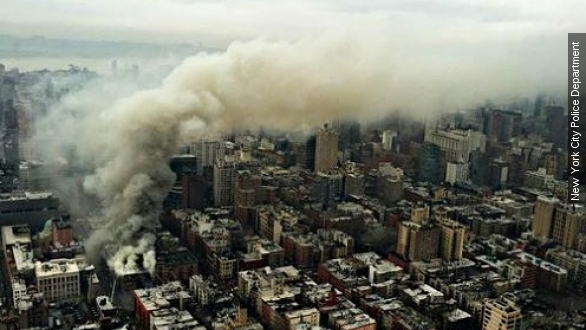 Three days after a explosion in New York City destroyed three buildings, two bodies have been discovered in the debris.

Rescue workers have been searching for two men who were believed to be in the building when the blast occurred Thursday. One was an employee of a restaurant in one of the buildings and the other was there on a date. Twenty-two others were also injured in the explosion. (Video via New York City Fire Department)

Authorities are still investigating the cause of the explosion and are looking into whether plumbing or gas line work might have been to blame.

Officials said about seven months before the explosion, utility workers discovered a gas line to a restaurant in the building was tapped illegally. The gas was then shut off to the building for about 10 days to make repairs. (Video via Fox News)

Inspectors from the utility company had visited the building about an hour before the explosion occurred and found that upgrades to the gas line did not pass inspection. The line was then locked so repairs could be made.

About fifteen minutes after those workers left, the restaurant's owner reported smelling gas to the building's owner, who called a contractor but not 911 or the utility company. (Video via New York City Fire Department)

Police say one of the bodies is being taken to the medical examiner to determine cause of death. Workers are still digging through debris.

This video includes an image from the New York City Police Department.