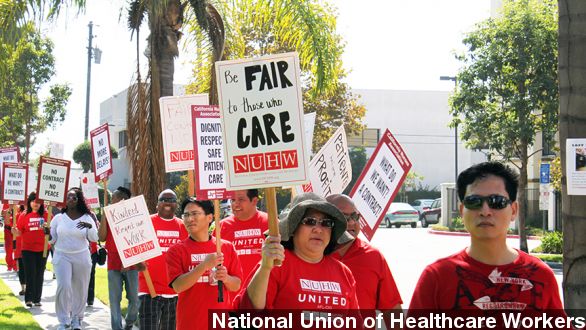 Now, 18,000 nurses in northern California are planning a strike because of just that.

VIA KNTV: "The union says Kaiser is not doing enough to protect nurses and other workers against the Ebola virus. Kaiser denies that claim and says all of its facilities will remain open during the nurses strike."

The strike is expected to affect more than 55 Kaiser hospitals and clinics. Kaiser Permanente and the nurses' union have been in contract talks since July, but organizers of this strike say they're focusing on safety standards.

VIA KXTV: "It's about patient safety and quality of care. ... The past three years Kaiser has been making $12 million a day, but yet they've cut health care workers."

Kaiser Oakland nurse Katy Roemer echoed those claims, telling the Hayward Daily Review, "The big issue for us is we are not seeing the resources we need on a daily basis to provide safe care ... I want to be very, very clear. From the nurses' perspective, we are going out on strike about patient safety issues."

In a statement, Kaiser Permanente said all personal protective equipment their workers use "meet or exceed guidelines from the Centers for Disease Control and Prevention."

Organizers announced the strike last week, but it's now getting more and more attention as the date approaches. Still, these strikes by Kaiser Permnanente nurses in the northern California area have happened before — even without the threat of Ebola.

In January 2012, an estimated 21,000 nurses were expected to strike against Kaiser. That walkout, according to the Nation Union of Healthcare Workers, was the fourth time workers had picketed since 2010.

KXTV talked with one nurse who said he will be crossing the picket lines, along with other nurses, on Tuesday and Wednesday.

The hospitals and clinics affected by the strike are expected to remain open, though elective procedures and some appointments may be rescheduled. Organizers are planning similar actions in Chicago, St. Louis, Washington D.C. and elsewhere.