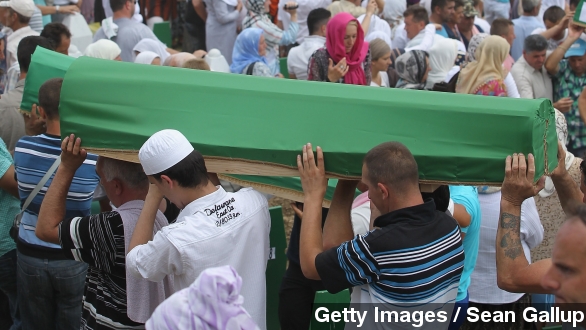 SMS
U.S. Could Deport 150 Bosnians For War Crimes
By Evan Thomas
By Evan Thomas
March 1, 2015
The U.S. is investigating as many as 600 Bosnian immigrants for possible connections to war crimes committed during the Bosnian war.
SHOW TRANSCRIPT

U.S. Immigration and Customs Enforcement plans to deport some 150 Bosnians living in the U.S. for crimes committed during the Bosnian war.

More than 120,000 Bosnian immigrants applied for U.S. visas in the '90s, but many weren’t given thorough background checks and some may have hidden prior military service. (Video via ABC)

But U.S. immigration officials are putting together the pieces from old records and interviews. U.S. immigration historian Michael MacQueen tells The New York Times, “The more we dig, the more documents we find.”

Already, the U.S. has found 300 immigrants potentially involved in war crimes, but The New York Times reports that could rise to 600 by the end of the investigation.

Half of those identified already are thought to be Bosnian Serb soldiers complicit in the 1995 Srebrenica massacre, where some 8,000 ethnic Bosniaks were rounded up and killed. (Video via Time)

Former U.N. Secretary General Kofi Annan once called it "the worst (crime) on European soil since the Second World War."

The U.N. ruled the massacre a genocide in 2004. Deutsche Welle reports the International Criminal Tribunal has subsequently convicted 80 people of war crimes.

U.S. immigration officials haven’t given a timeline for deportations, but it could be a lengthy process. The New York Times reports a high volume of immigration hearings could delay some current cases through 2019.