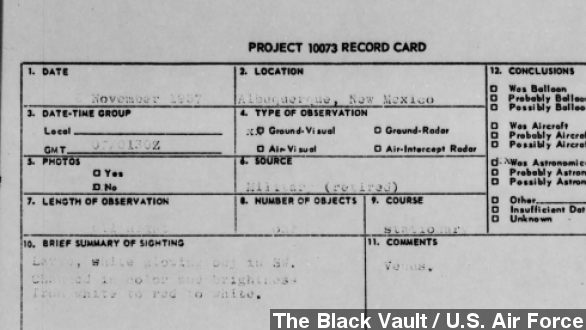 Are we alone in the universe? You might get answers if you've got time to sift through 130,000 pages of documentation. U.S. Air Force records on alleged UFO sightings and investigations just went live on the Internet — thanks to this guy.

"I believe the documentation proves there is a cover-up going on. ... There's absolutely something out there."

He's now posted the documents on his website, The Black Vault. They show that from 1947 to 1969, the Air Force documented more than 12,000 strange sightings, and 701 of them remain "unidentified."

"It's actually kind of..." (Video via Columbia Pictures)

It appears the cases were first documented after the alleged alien crash-landing in Roswell, New Mexico in 1947.

The investigation and documentation of these sightings was called Project Blue Book. But the U.S. government said years ago it would no longer look into such cases for a few reasons.

1) Because they didn't pose any threat to national security, 2) because there was no evidence of any extraterrestrial beings, and 3) funding.

But Greenewald doesn't buy that the investigations stopped. The docs are available online for all to see. You have to see to believe after all, right?