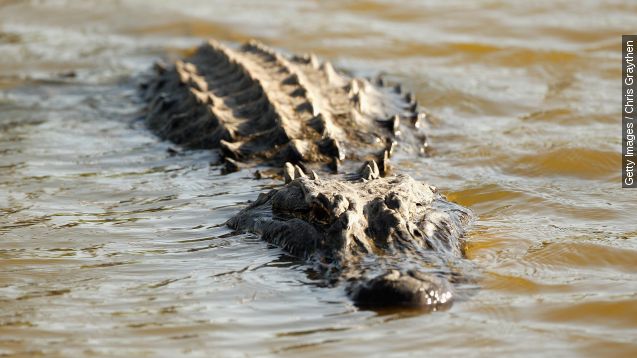 Shoppers near Houston received quite the surprise Saturday morning when a 12-foot, 800-pound alligator showed up at a local strip mall.

"Look at the size of that thing!"

"Look at the size of her! Little tiny thing," KPRC anchors comment.

"It's mostly guys out there and they're like 'Texas Parks and Wildlife sent you? They sent a girl?' and then I'm like 'Yesssss.' They kind of doubt me at first until I really get them taped and ready to go," Kroboth told KTRK.

It took about three hours, but the gator, nicknamed Godzilla, was finally subdued without incident.

Kroboth said she believes the gator might have been living in nearby Oyster Creek and ventured out to find food before becoming disoriented. (Video via City of Sugar Land)

A forklift was brought in and officials moved Godzilla to El Campo. The 50-year-old gator, who is partially blind, will reportedly remain in animal sanctuary for the rest of its life.