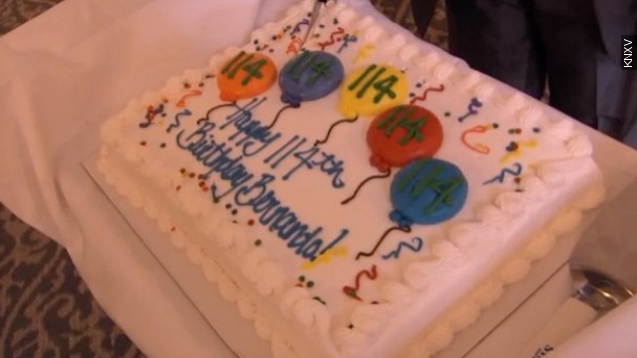 SMS
114-Year-Old Says He's Never Been Sick A Day In His Life
By Ryan Biek
By Ryan Biek
August 18, 2015
An Arizona man who celebrated his 114th birthday this week is just following in his family's footsteps.
SHOW TRANSCRIPT

You could say 114-year-old Bernando LaPallo was made to last. (Video via KNXV)

"Everybody asks, 'What's your secret?' I say obedience and moderation," LaPallo said.

Though the Arizona climate could be helping him now, he lived in New York for 90 years, and told Newsy's partners at KNXV he has never been sick.

He recommended plenty of garlic, honey, cinnamon and chocolate. And another interesting secret to longevity ... he says his father told him to put olive oil on the bottom of your feet so you don't "rust."  He also boils his water before drinking it.

Did anyone else only hear you don't have to give up chocolate? Sign me up for 115.