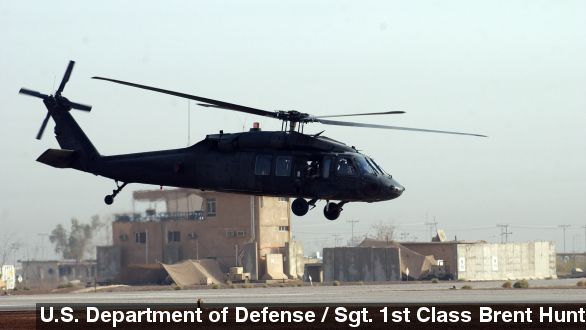 SMS
11 Servicemen Presumed Dead After Army Helicopter Crash
By Jake Godin
By Jake Godin
March 11, 2015
Seven marines and four aircrew are presumed dead after a helicopter crash. The helicopter went down in Florida during a routine training mission.
SHOW TRANSCRIPT

The 11 military members were on a training exercise out of Eglin Air Force Base, located about 45 miles east of Pensacola.

According to our partners at WFTS, the helicopter went down between Pensacola and the town of Destin around 8:30 p.m. Tuesday night while it was foggy. Debris from the downed helicopter was found at around 2 a.m.

The 11 members were previously considered missing, but military officials tell NBC human remains were found at the scene and they're now presumed dead.

The two helicopters taking part in the training exercise were UH-60 Blackhawks, seen here. The second Blackhawk safely returned to base.

The Marines are part of a Camp Lejeune-based special operations group in North Carolina, while the aircrew were from the Louisiana National Guard.

Another U.S. military helicopter crash occurred in January in Twentynine Palms, California. Both Marines, from Camp Pendleton, died in the accident.

Eglin Air Force Base has not yet released the names of those involved in Tuesday’s crash and the cause of the accident is currently under investigation.