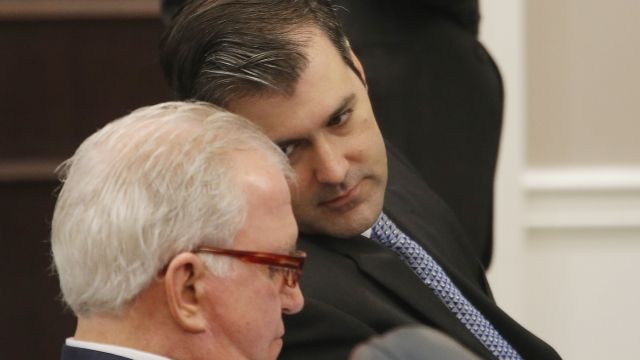 SMS
All But One Of The Jurors In The Walter Scott Murder Trial Are White
By Ryan Biek
By Ryan Biek
November 3, 2016
Former officer Michael Slager has been charged with murder in the death of Walter Scott, an unarmed black man.
SHOW TRANSCRIPT

The jury has been chosen for the murder trial of former officer Michael Slager, and 11 of the 12 jurors are white.

SEE MORE: Murder Trial For The Police Shooting Of Walter Scott Is About To Start

Only one black man will help decide whether the shooting of Walter Scott in North Charleston, South Carolina, was murder or a justified use of force.

Slager pulled over Scott for a broken taillight. After a short conversation between the two, dashcam video shows Scott running away from the car.

Slager chased him on foot and fired eight shots, killing the 50-year-old man.

During a two-day vetting process, the defense struck nine would-be jurors –– seven of whom are minorities.

The prosecution argued race was the only reason they were being dismissed, but then the defense provided detailed explanations.

One black juror out of 12 isn't exactly a representation of the community. Nearly half of North Charleston residents are black.

The racial makeup of the jury is raising eyebrows in another police shooting murder trial. In Ohio, University of Cincinnati officer Ray Tensing is on trial for the death of Sam Dubose. Two of the jurors are black, but the city is 45 percent black.

Opening arguments are scheduled for Thursday.