Lots Of People Registered To Vote After Florida Extended Its Deadline 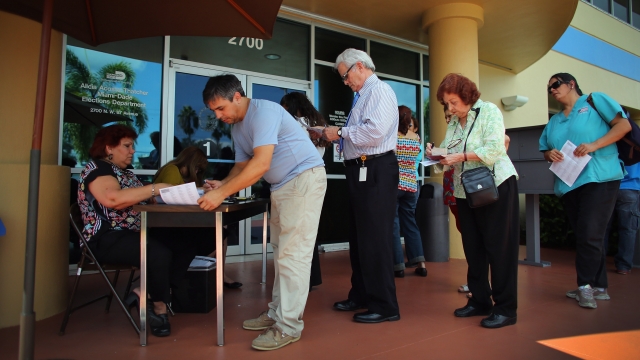 It appears a bunch of people took advantage of Florida's extended voter registration deadline following Hurricane Matthew. According to the Tampa Bay Times, over 108,000 people registered to vote during the extension.

Despite the hurricane, Florida Gov. Rick Scott initially refused to extend the registration deadline. The state's Democratic party successfully sued him to extend voter registration by a week.

SEE MORE: Hurricane Matthew May Cause Some Floridians To Miss Voter Registration

"Everybody has had a lot of time to register ... so I don't intend to make any changes," Scott said.

U.S. District Judge Mark E. Walker wrote in his decision, "No right is more precious than having a voice in our democracy."

In court documents obtained by Politico, lawyers for the Democrats said about 181,000 Floridians registered to vote in the nine days leading up to the state's 2012 voter registration deadline.

They also said a refusal to extend voter registration would have a "partisan effect." They said minority and young voters — groups that tend to be Democratic-leaning — "register at higher percentages shortly before the registration deadline."

They also mentioned in the lawsuit that Scott is the national chairman for a pro-Trump super PAC.

Lawyers for the state argued Scott didn't have the authority to extend the deadlines, and the judge agreed. The judge said it appears some of Florida's laws are flawed or unconstitutional.