106-Year-Old Dances With The Obamas At The White House 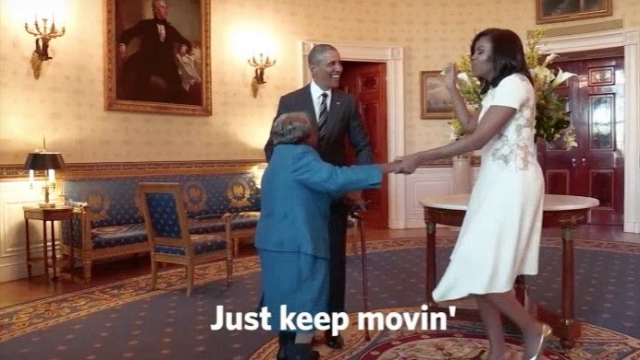 By Ryan Biek
February 22, 2016
Virginia McLaurin was ecstatic to meet Barack and Michelle Obama at the White House. But we're not sure who was more impressed with whom.
SHOW TRANSCRIPT

This is 106-year-old Virginia McLaurin fulfilling her dream of meeting President Obama at the White House.

"You want to say hi to Michelle?" President Obama said.

We don't know who was more impressed with whom.

"I want to be like you when I grow up," Michelle Obama said.

"You can," McLaurin said.

"What's the secret to still dancing at 106?" President Obama asked.

The three won't be forgetting that dance anytime soon.

"I thought I would never live to get in the White House. And I tell you, I am so happy," McLaurin said.

"We are happy to have you," Michelle Obama said.

"Look at him, right there!" Michelle Obama said.

"You have just made our day. You know that?" Michelle Obama asked.