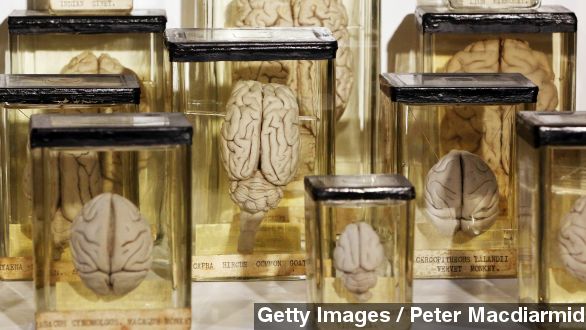 SMS
100 Human Brains Mysteriously Disappear From UT's Campus
By Jay Strubberg
By Jay Strubberg
December 3, 2014
About 100 jars containing preserved human brains have disappeared from The University of Texas at Austin, and no one knows where they went.
SHOW TRANSCRIPT

Where did they go? About 100 jars containing preserved human brains have disappeared from The University of Texas at Austin, and no one knows where they went.

According to the Austin American-Statesman, Austin State Hospital transferred a collection of 200 formaldehyde-soaked brains to UT about 28 years ago, but half the lot has up and vanished with little clues as to where they might be.

One UT professor told the outlet, "We think somebody may have taken the brains, but we don’t know at all for sure."

Of the missing brains, one belongs to Charles Whitman, who went on a sniper rampage at UT in 1966 and killed 16 people, in what is considered one of the deadliest campus shootings in the past sixty years. (Video via Discovery Channel)

"When Charles Whitman was shot they found a note and in that note he asked that his brain be left to science and looked by the pathologist to find out if there was something wrong with him," journalist Alex Hannaford told NPR.

And NPR also says that pathologist turned out to be the same guy "who put the collection together in the first place." Still, knowing that doesn't really leave a lot of clues for the Sherlock Holmes wannabes out there. But the story gets more intriguing.

According to a 1986 Houston Chronicle report cited in The Atlantic, there was a bit of a tug-of-war for the collection between UT, Harvard and other colleges in what was labeled "the battle for the brains" — we kid you not.

Aside from that clue, the brains whereabouts are pretty much anyone's guess at this point, though there's certainly plenty of creative ideas out there floating through social media on where they might be.