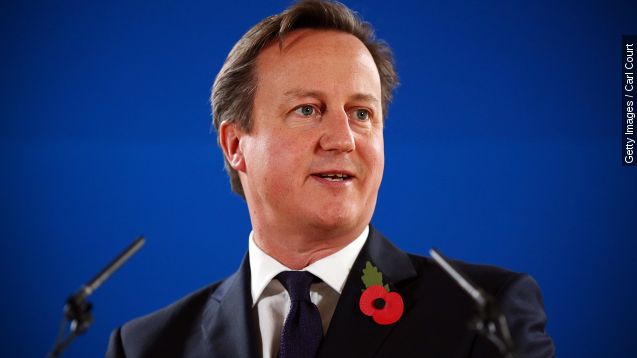 SMS
100 Days Of Cameron: Analyzing The British PM's Second Term
By Matt Picht
By Matt Picht
August 16, 2015
It's been 100 days since David Cameron's second term began. What has the Conservative majority accomplished so far?
SHOW TRANSCRIPT

It's been about 100 days since David Cameron shocked the pollsters and won a second term as prime minister outright, gaining enough support to form a slim majority in Parliament.

With the glow of electoral victory behind them, Cameron's Conservatives have been working hard to fulfill their election promises. Here's a brief summary of how they've done so far.

Cameron's promises to cut government spending and taxes have largely panned out. Then-Chancellor of the Exchequer George Osborne managed to cut enough spending to offer some modest tax relief and still promise a budget surplus by 2020.

But that 12 billion pounds in welfare cuts came at a heavy price: Cameron's government has dramatically slashed tax credits for poor families, including the child tax credits Cameron sort-of promised not to touch.

Cameron's government did increase the minimum wage to 9 pounds per hour by 2020 for people over 25, which made some workers — and former Conservative leader Iain Duncan Smith — very happy indeed.

In a nod to his party's far-right, Cameron's promised in-out referendum on EU membership is currently making its way through the House of Commons. According to the current bill, the vote must happen by 2017.

But Cameron himself wants to keep his country inside the EU; one of his first actions after re-election was a whistle-stop tour across Europe, meeting with EU leaders in an attempt to renegotiate Britain's role inside the bloc.

As promised, Cameron's government has been cracking down hard on immigration. In addition to a raft of measures making it tougher for immigrants to enter and stay in the U.K., Cameron also opted out of the E.U.'s resettlement plan responding to the migrant crisis in the Mediterranean this spring.

This attitude was exemplified in Calais, France, this summer, where mass attempts to illegally enter Britain through the Channel Tunnel caused a mini-crisis. Cameron responded to the influx of immigrants by beefing up security on the tunnel with sniffer dogs and additional fencing.

The rise of ISIS, and the attack on British vacationers in Tunisia, has put a renewed focus on combating global terrorism. Cameron has pledged to spend 2 percent of GDP on defense, and he almost proposed conducting air strikes against ISIS, though that plan never made its way to Parliament.

Instead, Cameron's tackling the rhetoric of terrorism in a new bill targeting extremist speech and the groups responsible for it. However, some of the measures in the bill — including new powers for communications regulator Ofcom — are causing plenty of concern about free speech.

Cameron is marking the occasion of his first 100 days with a push to convert more schools in Britain to "academies," which he says will give them more funding and freedom. The plan has been criticized by teachers unions who argue the transition is costly and doesn't guarantee better education.