10 Years Of Advances In Hurricane Monitoring 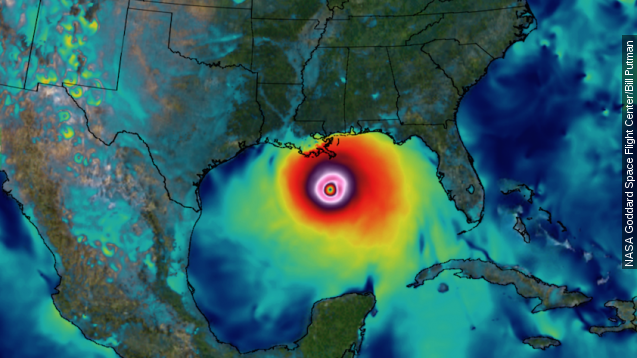 SMS
10 Years Of Advances In Hurricane Monitoring
By Evan Thomas
By Evan Thomas
August 22, 2015
Visualization and prediction tools have made significant strides in the 10 years since Hurricane Katrina made landfall.
SHOW TRANSCRIPT

Ten years ago this month, Hurricane Katrina made landfall over New Orleans.

Since then, climate scientists at NASA have made huge strides in hurricane monitoring and now very literally have a much clearer picture of how these storms form and behave.

Visualizing the interiors of storms helps predict how big they’ll get and where they might go — important information when lives and livelihoods are at stake.

NASA tracks features such as “hot towers,” or the thunderstorms that lift hot air up into a cyclone.

In 2005, it was understood their presence alone helped feed energy into the overall storm system. Now, researchers know it’s where they’re positioned within the storm that determines how big a hurricane will get. (Video via NASA)

In the last decade, NASA has replaced and upgraded its precipitation satellites and stepped up manned and unmanned flights within the atmosphere. (Video via NASA)

These all feed data into better computer models, running on faster computers. The goal is higher resolution.

NASA likens it to the visual improvements in video games, going from blocky shapes to something closer to photorealism. (Video via Electronic Arts)

Atmosphere scientist Dan Cecil explains: “For the intensity of a hurricane, so much comes down to the details of the really small processes and specifics in the inner core.” (Video via NASA)

And all this time, we have yet to deal with another Katrina. Since 2005, there hasn’t been a single hurricane stronger than category 2 that’s made landfall in the U.S. — a streak NASA says only happens roughly every two centuries. (Video via NASA)

This video includes images from NASA, Getty Images and the U.S. Coast Guard.