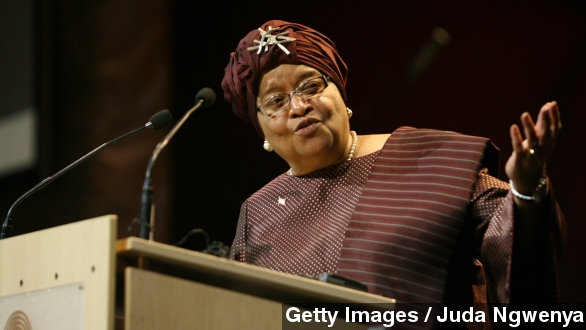 Liberian president Ellen Johnson Sirleaf has fired 10 of her top officials because they did not return to the country to help deal with the Ebola crisis.

Six assistant ministers, two deputy ministers and two commissioners were told to return to the country in August but failed to do so.

The president's office says the leaders "showed insensitivity to our national tragedy and disregard for authority" and were dismissed for being "out of the country without an excuse."

And Eight junior officials who are out of the country have had their pay suspended until they return. Johnson Sirleaf says they will be paid once "they return home to join in the fight against the Ebola virus disease.”

Ebola has already killed more than 1,200 people in Liberia and shows no signs of slowing down.

The World Health Organization has warned the disease is spreading especially fast in the country.

Resources in the country are limited, and it has been reported hospitals have been too full to accept any new patients. And because of poor sanitary practices, there is a shortage of healthcare workers, as they themselves are contracting the disease. (Video via Sky News)

Last week, Johnson Sirleaf wrote U.S. President Barack Obama asking for the U.S. to build and operate at least one treatment center, saying, "Without more direct help from your government, we will lose this battle against Ebola."

President Obama has not yet responded to the letter, but is flying to the Centers for Disease Control headquarters in Atlanta Tuesday to be briefed on the outbreak.