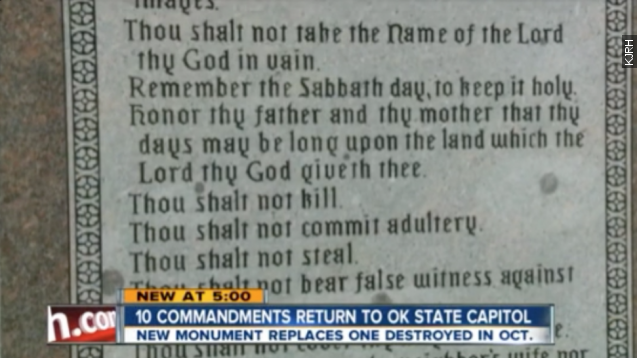 A monument listing the Ten Commandments was removed late Monday night from the grounds of the Oklahoma state capitol.

"After several lawsuits, the Oklahoma Supreme Court ruled 7-2 back on June 30 that the monument was religious in nature and having it on capitol grounds violated the Oklahoma Constitution," a KOKI reporter said.

A judge then ordered that the monument, which is 6 feet tall, be removed from capitol grounds by Oct. 12.

The monument that was removed Monday isn't the original one installed in 2012, though.

A man ran over the original monument with his car in 2014. Newsy's partners at KJRH report Michael Tate Reed said "Satan instructed him to urinate on the Ten Commandments and crash his car into the statue" when Secret Service agents questioned him about the incident.

The just-removed monument isn't going to be destroyed. The Oklahoman reported it's being installed less than two miles away at the Oklahoma Council of Public Affairs.